Fireworks at the beginning of November… My first November in New Zealand started with this surprise. I asked why fireworks were sold so early as it was nearly two months until New Year’s Eve. I was told that this was for Guy Fawkes Day. What kind of day was this? I asked a few New Zealanders but I was only able to get as far as to hear that this celebration had to do with a plot in England many years ago. Gunpowder was involved, Guy Fawkes was caught.

This answer left many questions open: who, in fact was this man and why would he plot – and why did this lead to the use of fireworks in New Zealand? I decided to find out and get answers to my questions.

Guy Fawkes was Catholic and was born into the “Church of England” society in 1570. The situation of practicing Catholics in England had become very difficult during the reign of Elizabeth I. Catholics who didn’t want to convert to the Church of England had to pay fines, their properties were confiscated and sometimes they were imprisoned or even executed. When King James I, the son of Catholic parents, ascended the throne, he promised more religious freedom but once he was King, he reinforced penalties against practicing Catholics.
The Catholics were disappointed. They had hoped for more justice. Instead, the king didn’t keep his promise. In fact, restrictions against the Catholics were in place until 1829.

Is it really a surprise that disappointed people like Guy Fawkes turned against “King and country”? Guy Fawkes was part of a plot to get rid of this new king. Explosives under the House of Lords were prepared.
When an anonymous letter denounced the plan, Guy Fawkes, whose turn it was to guard the gunpowder, was arrested on 5 November. Guy Fawkes was tortured until his execution on 31 January 1606.

To me, this is a sad story. The head of State had broken his promise, a couple of persons tried to use violence by preparing for an explosion. They were captured, killed and the injustice continued.

Why did this sad story turn into a celebration with fireworks in a far-away country like New Zealand? I don’t really know.

A few months after my first 5 November in the country, I learned that this day also has a very important significance for Aotearoa New Zealand: It is Parihaka Day.

Looking back at the origins of this day, there are similarities to Guy Fawkes but also some opposite attitudes.

In the second half of the 19th Century, New Zealand saw many new migrants and the settlements spread out. Land Wars were raging. Some Māori from different regions set up a new village in Taranaki: Parihaka.
The leaders, Te-Whiti-o-Rongomai and Tohu Kākahi, were well educated and were familiar with Christian teachings and the Bible. Having seen a lot of suffering of their people, the leaders of Parihaka decided to put aside practices of vengeance and revenge. They decided to lead a non-violent resistance against the settlers and Government troops.
However, the village was open and vulnerable. Rather than fighting against the Pakeha, the men of Parihaka were ploughing the fields and hence claiming back their land that had been confiscated by the Government. When the men were arrested, further men followed and took their places.

In the morning of 5 November 1881, the government troops invaded Parihaka, arrested the men, looted and destroyed houses. The men were sent to different prisons in New Zealand. A law that was introduced in 1880 had allowed Māori to be imprisoned indefinitely.

Guy Fawkes and Parihaka – both cases were about injustice and resistance: one with using force, the other one without force.

My thoughts turn to Te-Whiti and his peaceful resistance. He was dreaming of a new society in which all people in Aotearoa New Zealand would be sharing peace, happiness and prosperity with one another.

Wouldn’t it be good if 5 November would be known as Parihaka Day as an incentive to continue working towards realising Te Whiti’s dream? 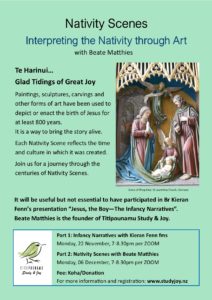